Company communications lessons following the death of the Duke of Edinburgh The death of His Royal Highness, The Prince Philip, Duke of Edinburgh (that was his correct title – something I learned the last couple of weeks) provoked the usual feelings and emotion of sadness, sympathy and grief associated with the death of a well-known person in the public eye.

Despite certain aspects of the duke’s life coming under fire, and whatever you think about that, he was still the consort of the monarch, and that afforded him certain privileges and responses to his death.

Operation Forth Bridge, as the plans for his death were known as, has been rehearsed for many years, as has Operation London Bridge, the plan for when the Queen dies. Because of their ages,  marketers should have been considering the impact of their passing on their communications strategy for when that time comes.

Without wishing it to sound like a dress rehearsal, the death of Prince Philip provides marketers with an opportunity to review that strategy for the modern era.

Upon the announcement of his death, the rehearsed plans duly commenced. An announcement was made on media outlets. Here’s the example from the BBC, which interrupted its schedules for the breaking news:

The BBC cleared its schedules for the remainder of the day on all channels, simulcasting on BBC One and BBC Two. BBC Four was suspended altogether (BBC Three is currently only an online, on-demand channel) and CBBC directed viewers to BBC One for ‘an important news story’. ITV, Channel 4 and Channel 5 all did similar.

Many organisations updated their websites, and social media feeds changed their branding to reflect a more sombre tone.

However, the assumption that the nation would willingly enter a period of extended national mourning did not appear to take into account the nature of how audiences are consuming content.

The replacement of normal programming with memorials and tributes is to be expected and, arguably, is appropriate. The key difference in 2021, I would argue, is the amount of choice available to the viewer.

When the Queen Mother died in 2002, there was no Netflix or Disney+. There wasn’t even Facebook, let alone the many other platforms we consume content on. It seems to me that the Operation Forth Bridge plans were somewhat based on the same scenario.

Of course, where there is choice, audiences can choose not to consume the network content. Rather than watching BBC for several hours, a viewer can watch something on Netflix, or even BBC iPlayer. Those who would prefer to consume the news can do so. Arguably, the BBC in particular is caught betwixt two polarised views – where they would receive negative commentary from certain wings of government for a lack of patriotism, and others preferring to watch Bargain Hunt.

By early evening on Friday, April 8, 2021, thanks in part to a public backlash on social media, Channel 4 reversed its decision to change schedule and resumed normal programmes. It judged that its audience wanted relief from the news and chose to meet that need.

What has this to do with marketing?

It provides us with a reminder that we should be reviewing our plans for major events, so that they reflect how our audiences are feeling about them. We have seen many incidents and events in the last year or so: the murder of George Floyd, coronavirus, Brexit and more. Many could not be planned for, but all require a strategy for communication.

In general, my advice is always to keep listening to what is going on. A business should be looking at current affairs and consider how its audience may be feeling about it. We know that consumers like to buy from businesses that care about the same issues as themselves.

Certain events can be planned for. The death of the Queen is one, and now is a good time to reflect on recent events and how you would wish to operate in that moment. Here are some things to consider:

This has been a mainstay of marketing plans. As close to the moment it is announced, scheduled content should be paused. Not necessarily out of respect, but more that it could be that your pre-planned content is immediately inappropriate. Pausing content is a risk-free option. When you choose to unpause is clearly up to you, but you’ve avoided slipping on any comms banana skins in the meantime.

While you have content paused, all you really need to do is review content that you have planned to see if it is still appropriate. Think about tone, references, imagery. Also consider dates and potential clashes with key activities, such as any funeral/memorial and national silences.

Something you should be doing all the time, but think about how your audience feels about the situation. Is it something that affects them greatly and should you acknowledge it? What is the general strength of feeling? Is there a possibility of backlash by your approach? Do you care about that?

Some brands that have a close connection to the royal family may choose to add memorial content to their website and other content they produce. We saw this with Land Rover, the armed forces and other companies that had an association with Prince Philip. But it’s unlikely to be common, even with the Queen’s death.

What you need to consider is: Is your audience more like the BBC’s or Channel 4’s?

One thing I noticed about the Duke of Edinburgh’s period of mourning was how quickly things moved on. Initially, I expected black ties throughout the week, but by Monday, TV presenters were wearing muted, dark clothing, not necessarily black. It seemed fun and japes were back by the Wednesday. It’s more likely to be lengthy for the monarch, but even so, there’s a chance it won’t be as full-on as perhaps it was considered to be.

As a business, it’s worth keeping an ear to the ground on what is going on elsewhere and be ready to recommence normal marketing, or at least restarting some messaging. I genuinely feel this is likely to be relatively soon after any announcement, possibly a day or two, but we won’t know until it happens. Either way, your team needs to be flexible and adapt in a period between the death and the funeral.

Whenever you choose to restart your marketing, it is helpful to be mindful of how it goes down with your target audience, or those that come across your content. Regular searching for your brand name on social media and the web will help you understand how people feel about the content you have restarted. Creating a Google Alert is the most cost-effective way of doing this, but you can use other brand mention tools as featured on this article [link to the article with Brand 24 mentioned].

Ultimately, some of this will be guesswork and relies on your instincts as a marketer as to what to say and when. Providing you are serving your core audience, and are being respectful, the rest is about understanding in advance what to do after the initial announcement.

Guidance on messaging and reacting to events is something we frequently advise our clients on. Find out more about this particular service here.

The lessons we learned from MarketEd.Live and how we’re going to use them for our clients 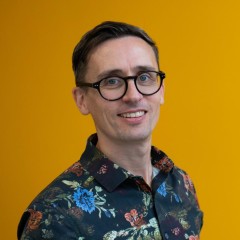 Paul, aka BizPaul (to everyone), is the little big cheese (Director) at LikeMind Media. He can often be found talking to others about all things about conversations, whether that’s through social media, writing or even audio. With over 20 years’ experience in bringing businesses and customers together, Paul has worked with a vast range of clients including a working cow farm, a smart factory software company and a pregnancy pilates business. He’s the host of MarketEd.Live, our flagship marketing education event in Nottingham and the associated podcast.